TO THE SCOTTISH MARITIME MUSEUM

Known for oil and watercolour seascapes and landscapes, Wilkinson also became a prolific illustrator after honing his sketching skills whilst working for the Illustrated London News early in his career.

He created many designs for travel posters for the London and North Western Railway, Southern Railway and London Midland and Scottish Railway. It is likely that these two watercolours, with their bold, strong colours and outlining, were drafts or sketches for travel posters that were not made. 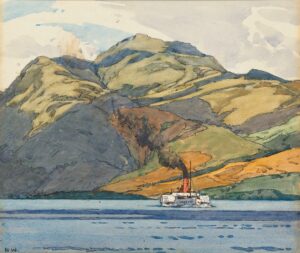 As well as strikingly depicting leisure and pleasure on Scottish waters, the watercolours, which were painted around 1930, complement the Museum’s collection of travel posters. These include ‘Kyles of Bute’ created by Alasdair Macfarlane for British Railways in 1956 and a scene of Rothesay designed by Frank Henry Mason for London and North Eastern Railway (LNER) in 1927.

Wilkinson’s experience as a Royal Navy volunteer in World War 1 inspired him to create ‘Dazzle’ camouflage to help the Navy evade Germany’s U-boats.

Rather than trying to hide vessels, Wilkinson’s ‘Dazzle’ designs applied bold shapes and contrasts to distort the ship’s form and direction. It was soon adopted by the Admiralty and hundreds of Dazzle designs were created to ensure each ship was different.

We are delighted to have acquired these beautiful paintings of two of Scotland’s most famous views over water by renowned British artist Norman Wilkinson.

“The paintings were sketches to showcase Scotland and tempt tourists north of the border. That they use Oban Bay and Loch Lomond as their subject matter is not surprising given the strong association in the public consciousness between Scotland and maritime heritage.

“By acquiring these works for the public, we are building on the foundations laid by our Heritage Lottery Fund’s Collecting Cultures project to develop a nationally significant collection of Scotland’s maritime art.” 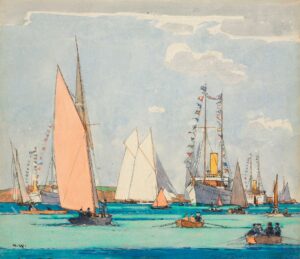 The Scottish Maritime Museum’s new national art collection, much of it on show across the stunning and vast, glass roofed Victorian Linthouse building (itself a former shipyard engine shop), was created through SMMart: Enriching the Imagery of Scotland’s Maritime Heritage.

This ambitious, three year project to create a nationally significant art collection to enrich the Museum’s nationally recognised maritime heritage, was made possible by a grant from the Heritage Lottery Fund’s Collecting Cultures programme. Support for individual acquisitions also came from Art Fund and the National Fund for Acquisitions.

He was also elected Honourable Marine Painter to the Royal Yacht Squadron in 1919.