A collaborative project by artists Janette Kerr and Jo Millett, Confusing Shadow with Substance unravels the archipelago’s relationship with the sea and the past, fusing together archival materials and the voices of the people of Shetland, with recordings and film made on the beach and on, and under, the sea.

Visitors will also enjoy the added draw of artworks evoking coastal life in working harbours and fishing villages around Scotland drawn from the Scottish Maritime Museum’s new national art collection on show alongside the installation. 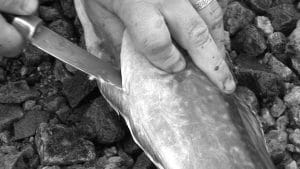 “Shetland fisherman Davie Smith uses the phrase ‘confusing shadow with substance’ to describe past navigation techniques of fishermen who used local landmarks called ‘meids’ and the ‘Moder Dy’ or ‘mother wave’, an underlying swell of the sea, to plot their way.”

“Janette and Jo similarly navigate the traces – tangible and intangible – of Stenness fishing station in Northmavine, Shetland, where hundreds of men worked and lived in makeshift booths and böds for the summer months in the 18th and 19th centuries, yet little is left for the eye to make out today to create a thought-provoking experience.”

Poised between land and far haaf, the shoreline draws us to the sea, a constant presence in a world of embedded memory.

Our work weaves together contemporary and historical images, Shetland voices and sounds, in an installation which allows the audience to reflect on and consider the interplay between that which is gone, that which remains and that which drifts between the two.”

Janette Kerr is a successful painter of Shetland seas shown widely in the UK and abroad and who has worked on residencies in the UK, Norway and, more recently, the High Arctic.

The making of Confusing Shadow with Substance and the national tour have been funded by Creative Scotland.

Confusing Shadow with Substance is included in Museum admission.