One of Britain’s most important historic vessels, which is preserved at the Scottish Maritime Museum in Irvine, has been reunited with its original bell thanks to a kind donation.

MV Kyles, which is believed to be the oldest Clydebuilt vessel still afloat in the UK, was launched on March 12 1872 by John Fullerton and Co. of Paisley and destined for life as a cargo coaster on the Clyde.

Although MV Kyles did indeed begin as a tender for the fishing fleet collecting catch from Clyde fishing boats and transporting it to railheads on the coast, the vessel went on to have a fascinating and changing working life.

Over the following 147 years and a number of structural adaptations made by some 24 owners to suit changing roles, the vessel and bell became parted until discovered by donor Mrs Carole Harries whilst moving house.

Mrs Harries unearthed the bell in the garage of her new house in Glamorganshire in the 1980s. The bell is thought to have been taken from the vessel when it laid in the Glamorganshire Canal between 1939 and 1944.

As well as being, we believe, the oldest Clydebuilt vessel still afloat in the UK, MV Kyles is fascinating and important for the structural changes made over such a long working life.

Despite those changes though, much of the vessel is in original condition including the iron and steel hull and steel deck and we’re very grateful to Mrs Harries for donating what we believe to be the original bell. 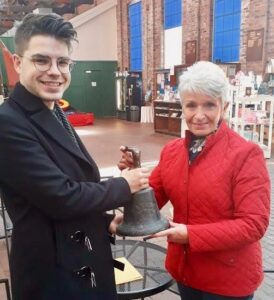 MV Kyles, which has retained the same name throughout, is recognised as one of Britain’s most important historic vessels and is included in the Designated Vessels list of the National Historic Ships Committee.

The 147 year old MV Kyles began as a basic steam engine cargo coaster typical of those built by smaller yards on the Clyde to fulfill an essential service before land transport became dominant.

MV Kyles then went on to carry heavy and general cargoes on short coastal voyages docking in Scotland, Newcastle and South Wales before being converted to work as a sand dredger in the Bristol Channel in 1921.

Here, according to a Mr L G Gardiner writing in Ships Monthly Magazine “sailors on the other dredgers (joked that) ….as long as you could see steam rising from the sand pump engine or an odd beer bottle thrown over the side, the little Kyles was still afloat.”

Throughout WW1, MV Kyles was out of service, de-registered and laid up in poor condition on the Glamorganshire Canal.

In 1944, MV Kyles was sold on by a salvage contractor to Ivor P Langford, a ship owner and repairer near Gloucester. He repaired and re-registered the vessel to work as a cargo vessel back in the Bristol Channel.

MV Kyles was then converted from steam to diesel in 1953 for a new life as sludge tanker, again in the Bristol Channel.

After coming to the end of its working life, MV Kyles became a much-loved vessel in the Bude area before being purchased by the West of Scotland Boat Museum Association, the precursor to the Scottish Maritime Museum, in the early 1980s.

Funding was secured to restore the vessel to the 1953 refit taking it back to steam.

In 1999, after successful sea trials, MV Kyles was registered back in the vessel’s birthplace of Glasgow, 112 years after first entering the records there and under the 24th owner.