A staggering 2,400 visitors of all ages popped along to the opening weekend celebrations for the Scottish Maritime Museum’s brand new blockbuster summer exhibition Sea Monsters! on Saturday 2 and Sunday 3 July

As well as touring the new Sea Monsters! exhibition, visitors enjoyed magical mermaids, giant inflatable monster tentacles and all the fun of the fair at the award-winning attraction on Irvine Harbourside.

The festival weekend also marked the start of the Museum’s bumper ‘Come and Sea Us’ summer events programme which runs through to September.

Chris Woodland, Commercial Manager at the Scottish Maritime Museum, says:
It was fabulous to see such a big turnout for the opening weekend of our Sea Monsters! exhibition which celebrates the fantastical and mythical sea creatures of Scottish legend and maritime mythology across the world.

“We’re now looking forward to welcoming everyone to our second celebration weekend which takes place during the Making Waves festival on Saturday 23 and Sunday 24 July.

“We’ve some great activities lined up for visitors over the Making Waves weekend including traditional fairground games, displays of model boats, trains and lifeboats and a Makers Market featuring goods and crafts made and sold by artisans and local businesses. Market goods will range from candles, homeware and art to clothing, jewellery, crafts and even the perfect accessories for ‘pooches’! It’s going to be an unmissable weekend for everyone!” 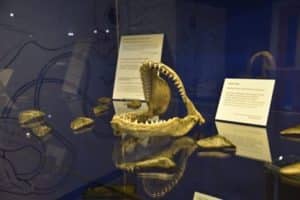 Highlights of the Sea Monsters! exhibition include fabulous fossils on loan from The Huntarian at the University of Glasgow including an Ichthyosaurus (large marine reptile); an Acrodus Anningiae (extinct cartilaginous fish); an Carcharocles Megalodon (pre-cursor to Great White Shark); and a Rhizodus Hibberti (an extinct fish) and images of a half man, half fish ‘Sea Monk’ monster from the 16th century – was it real or fake!

Art on show includes sculptor Andy Scott’s Kelpie maquettes, artwork by illustrator and designer Axel Gutapfel and Irvine artist Maree Hughes’ interpretation of the legend of the Selkies or ‘seal people’ from the Northern Isles.

‘Come and Sea Us’ children’s activities over the summer school holidays include ‘Little Sea Monsters’ sessions for under fives, Sea Monsters Make and Takes and STEM (Science, Technology, Engineering and Maths) sessions for all ages as well as Sea Monsters Art Workshops and a week-long Sea Monsters Theatre Workshop for over tens.

The ‘Come and Sea Us’ programme has been made possible by the support of the Museum and Galleries Scotland (MGS) Museums Recovery Fund.

For more information about ‘Sea Monsters!’ and ‘Come and Sea Us’ events,
visit www.scottishmaritimemuseum.org or follow @scotmaritime on social media

Issued on behalf of the Scottish Maritime Museum by
Joanna Harrison, Mobile: 07884 187404