‘Shipyard Brotherhood’ was conceived during Goudie’s unique seven year project documenting construction of the next generation of Britain’s naval vessels at BAE Systems shipyards at Scotstoun, Govan and Rosyth between 2009 and 2016.

Shipyard Brotherhood’ is an amalgamation of different scenes, principally at Govan, during the construction of HMS Queen Elizabeth. There’s a sort of religious echo in the pose of the top figure who dominates the scene so the idea of a ‘brotherhood’ came from that. There’s no doubt the sense of the workforce in a shipyard (mostly men) being bound to one another and responsible for one another is very profound. It’s also noticeable that amidst all the noise and activity of a working yard, there are also moments of stillness, pauses in tasks during which the resting figures take on a meditative air.”

Looking back at his time at the Scotstoun, Govan and Rosyth 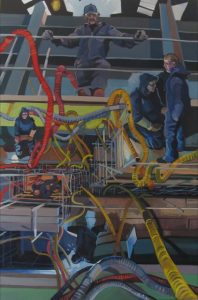 “Shipyards are awe-inspiring places… the sublime sense of scale and energy, the furious and relentless pace of component panels being assembled into towering monuments of steel. There is noise, there is chaos and fire, there’s a visceral sense that you’re part of a vast, industrial organism that will spit you out of the way, unless you watch your step.

“Yet, it was also important to me to capture the shipyard workers. Walking in I might have expected machismo and aggression but instead I found welders, gaffers, sparks and chippies intense and sensitive people intrigued by what I was creating.

“’Shipyard Brotherhood’ was created amidst the sparks and the steel of a working yard and it seems appropriate to me that it should be displayed at the Scottish Maritime Museum, surrounded by the historic vessels, engineering artefacts, machines and shipbuilding tools that constitute our national, maritime legacy.”

“We are thrilled to add ‘Shipyard Brotherhood’ to our burgeoning national art collection.

“Lachlan Goudie is a very significant living Scottish artist and his ’Shipyard’ exhibition was an unprecedented artistic exploration of contemporary Scottish shipbuilding.

“The ‘Brotherhood’ in his painting also resonates perfectly with our curatorial philosophy at the Scottish Maritime Museum. We always look for new and engaging ways to tell the stories of the people behind our maritime heritage – all the craftsmen, inventors and explorers who helped shape shipbuilding across the world.

“‘Shipyard Brotherhood’ gives us a rare insight into the modern shipyard and the passion and camaraderie of the skilled shipyard workers constructing these giant vessels.”

‘Shipyard Brotherhood’ will go on display in the Scottish Maritime Museum’s vast Linthouse building on Irvine Harbourside. Aptly, the 1872 Linthouse was formerly the Engine Shop of Govan shipbuilders Alexander Stephen and Sons before being relocated to Irvine in 1991 to house the maritime collection.

Goudie’s lifelong interest in shipbuilding began as a child growing up in Glasgow in the early 1980s. After interviewing the formidable Clydeside trade unionist Jimmie Reid for a school project aged 12 and watching his father Alexander Goudie transform Brittany Ferries’ flagship Le Bretagne into a floating artwork, his interest grew into an ambition to paint and memorialise this extraordinary industry.

Goudie, who studied at Cambridge University and Camberwell College of Arts, was named a ‘creative to watch’ by the Times newspaper in 2012. A year later, he became a full member of the Royal Institute of Oil Painters and has exhibited his work, which includes portraiture, landscapes and still life, in New York, London, Edinburgh and Glasgow.

As well as co-presenting BBC1’s The Big Painting Challenge, Goudie has written and presented many programmes for BBC Four including ‘Stanley Spencer: The Colours of the Clyde’ (2014) and ‘Awesome Beauty: The Art of Industrial Britain’ (August 2017).

Latest Events and News
Exhibitions
© Copyright 2018. Website by Adworks
Back To Top
×
We use cookies to ensure that we give you the best experience on our website. If you continue to use this site we will assume that you are happy with it. We will always store your personal details securely and never pass them on to a third party unless we have informed you. We'll use them to provide the service that you have requested and communicate with you in the way(s) that you have agreed to. Your data will also be used for analysis purposes, to help us provide the best service possible. For full details see our Privacy Policy.AgreeView Privacy policy