The Art That Made Us Festival: Leaving Roan

BBC The Art That Made Us Festival Online

As part of the Art That Made Us Festival launched by the BBC in April, the Scottish Maritime Museum has developed the online exhibition ‘Scotland’s Quarantine Island’. This interactive exhibition that includes documentary footage and radio interviews tells the story of how previously abandoned Eilean nan Ròn (Island of Seals) off the coast of Sutherland, Scotland became the site of research on the common cold in 1950. 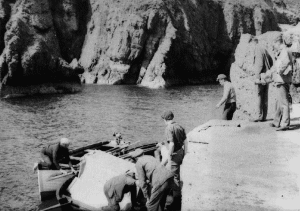 The experiment took place over a three month period, from June to September. The research team wanted to test the theory that catching the virus was less likely in colder, remote places. Doctors felt that the island’s location and harsh conditions were ideal for the volunteers to build up immunity from infection. Twelve volunteers would quarantine on the island for the duration of the experiment. They would live in the abandoned houses, once home to the Gaelic community who had evacuated the island.

For more information you can view the exhibition here –

You can still visit the Museum to see the artwork involved as part of our Solitude At Sea exhibition in which we reflect on life at sea, on oil platforms, lighthouses and islands and the parallels between isolation at sea and Lockdown. This exhibition is open until Sunday 5th June 2022 and is included in the Museum admission price.

Did you miss the Art That Made Us eight part series on BBC? You can catch up here

BBC The Art That Made Us Festival Online