Come and take a selfie with the biggest fish in town!

The sculpture was created by Wilson for the Giving Nature a Home project in the run up to COP26, the UN Climate Change Conference, that will be held in Glasgow in November. This collaboration with Garnock Connections, the RSPB and Climate Change Scotland purpose is to highlight the issues of plastic pollution in the oceans and waterways of the world. The choice of materials represents the discarded packaging and fishing industry litter that ends up in the ocean causing problems for the fish and mammals that inhabit that environment. 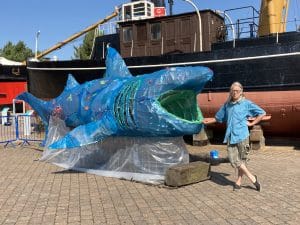 “The materials were to be collected by children on litter picks however Covid interrupted the project, so they were found among my collection of junk. The main structure is old sheep fencing, recycled polythene and used scaffolders debris net… the netting feel, the polypropylene rope and string stitching, was to give the feel of discarded fishing nets and marine waste.”

“This November the eyes of the world will fall on Glasgow for the UN Climate Conference, COP26.  Leaders from around the planet will hold the future of our climate, nature and communities in their hands as they look for a solution to the climate and nature crises.

We know that time is running out to save nature, in Scotland, 49% of wild species have declined since the 1990s and 1 in 9 species are at threat of extinction.

Through Climate Scotland we want to send our leaders a message that they cannot ignore and bring 50,000 voices for nature and the climate to COP. Help us to show them how much you care by adding your message to the campaign at www.climatescotland.org” 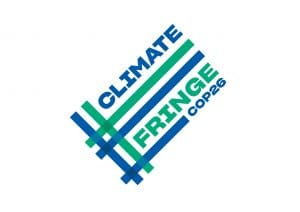 Latest Events and News
Exhibitions
© Copyright 2018. Website by Adworks
Back To Top
×
We use cookies to ensure that we give you the best experience on our website. If you continue to use this site we will assume that you are happy with it. We will always store your personal details securely and never pass them on to a third party unless we have informed you. We'll use them to provide the service that you have requested and communicate with you in the way(s) that you have agreed to. Your data will also be used for analysis purposes, to help us provide the best service possible. For full details see our Privacy Policy.AgreeView Privacy policy