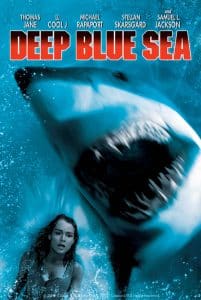 Science fiction, horror film, set in an isolated underwater facility. The film follows a team of scientists and their research on mako sharks to help fight Alzheimer’s disease. The situation plunges into chaos when multiple genetically engineered sharks go on a rampage and flood the facility.

This summer/autumn season of monster ‘screamings’ is one of the highlights of the bumper events programme celebrating the Museum’s new summer blockbuster exhibition, ‘Sea Monsters!’

The screenings, which include the classics ‘20,000 Leagues under the Sea’, ‘Splash!’ and ‘Deep Blue Sea’ up to more recent films, the critically acclaimed ‘The Shape of Water’ and the animated ‘Luca’, will run every second Sunday until the end of the ‘Sea Monsters!’ exhibition on 31 October.