This family activity gets you thinking about artworks in our collection. We have given you two examples but the ‘See, Think, Wonder’ prompts on the worksheets can be used for any of the artworks in the Scottish Maritime Museums art collection which can be viewed on Art UK here. 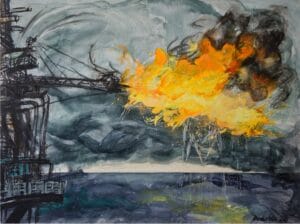 Flare Boom was painted by Kate Downie after a one-week residency in June 1988 on the North Alwyn oil platform in the North Sea, near the Arctic Circle. The dramatic work is based on the flaring of waste gas from the drilling platform. 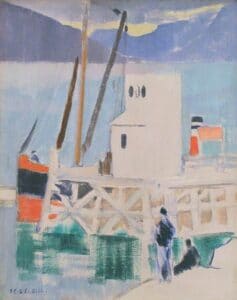 The Pier at Cove was painted by FCB Cadell. Cadell was one of four artists known as the Scottish Colourists who often used bright colours and pronounced brushwork in their paintings. Whilst he is best known for his paintings of Iona and the socialites of Edinburgh, this is a rare example which features a boat.

Use the worksheets below to talk more about the artworks together and perhaps be inspired to create a painting of your own with a Maritime theme. 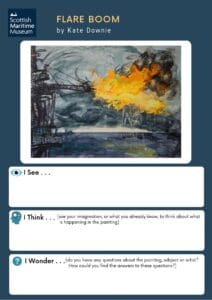 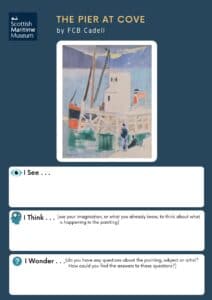