One of the Museum’s vessels is the tug Garnock, it currently sits in the wa-ter next to our slipway and Puffer’s coffee shop, where it has been a regular sight in and around Irvine harbour for more than sixty years.

Let’s take a little ‘Doctor Who’ trip back in time at the harbourside and find out why there was a tug stationed there for more than 100 years.

Irvine became an important West Coast harbour in the mid 1600s, long before the ports in Glasgow and Greenock came into being. these two, but in the early 18th century they began to expand.

Some of the cargo shipped out from Irvine was coal, tar, lime, and chemi-cals, with imports consisting of iron, wood (From Finland & Russia) and so-da ash from Belgium. With all this business and shipping, a tug was of big importance to the harbour.

The first official harbour tug was the Scottish Maid, purchased in 1857, which served until 1871 and was then replaced by Vivid in 1883, which in turn had a short working life in Irvine. Harbour duties were then taken over by the George Brown in 1887. The George Brown was a paddle steam tug which had a very long working life, retiring in 1957 at the grand old age of 70!
This is where the Garnock comes in, as the brand-new diesel-powered ship for harbour duties. Made on order for the Irvine Harbour Company (A sub-sidiary of ICI), it was used to tow ships to and from the ICI Ardeer wharf and would also be used for merchant shipping using the main harbour area. As the working harbour became quieter in the 1970s and 1980s, Garnock’s main duties were with ICI. One of the jobs that the ship had was to dump boxes of expired nitroglycer-ine explosives in the deep water channel west of Ardrossan. While doing this in February 1984 there was a serious incident that ended the ship’s working life. Unknown to the crew, a box of the explosives had drifted back under the stern and when the engines were started up to move off, the pro-peller smashed into the box causing a large explosion under the water.

This explosion badly damaged the prop, the rudder, the hull (to the extent that the hull was opened in one area) and caused a crew member who was painting a part of the wheelhouse interior, to splash the green paint all over the wheelhouse!

You can hear more about the explosion from a crew member here: 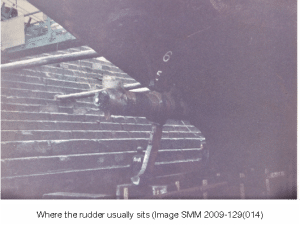 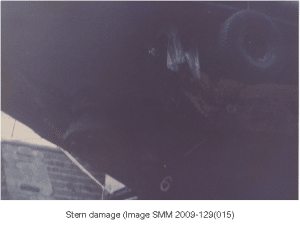 With the vessel stranded at sea, the Troon lifeboat had to be called out to tow the tug back into harbour. After an inspection, it was deemed far too expensive to make working repairs, so work was done to ‘patch it up’ and Garnock was later donated to the young Scottish Maritime Museum later that same year. 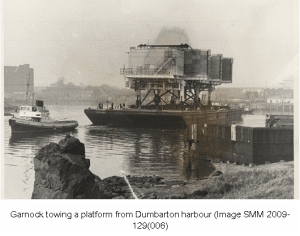