Working at sea is still very dangerous: fishermen in Britain, for example, have a one in 20 chance of being killed on the job during the course of their working lives. In previous years the odds for survival were even worse and so selfless acts of bravery at sea were especially honoured and celebrated as the risk involved in rescue was so much greater.

The Lloyds Medal for Saving Life at Sea was awarded in these exceptional circumstances, and last week the Scottish Maritime Museum was fortunate enough to receive one as a donation.

Our Lloyds Medal was awarded in 1878 to Ardrossan born Captain Peter Sharp, who was master of the sailing brig ‘Annabella Clark’.  He was awarded the Lloyd’s medal, as well as an Albert Medal of the First Class, for his actions saving the lives of the crew of French ship ‘Melanie’ when 600 barrels petroleum she was carrying exploded on the River Adour in southwest France on 20th November 1878.

According to the Lloyds List, the fire blazed from 6pm to 11pm completely destroying the vessel and cargo. Captain Sharp and a sailor named James McIntosh who was also recognised with a medal, were moored nearby. They rescued men from the ship and the burning river, sustaining serious injury.

The Edinburgh Gazette records: ‘A mass of flame shot up from the main hatch and the ship quivered all over from the explosion of some of the barrels. The ship’s seams opened at once, and the petroleum pouring through spread a belt of flame around the ship. The master and a seaman then jumped overboard, but the mate remained to try to save his son who was lying helpless under some heavy objects, which had fallen on him. Captain Peter Sharp…(and)… James McIntosh…. rowed their boat through the flames, picked up the seaman who had jumped overboard, and took the mate from the blazing vessel….(Such were the injuries sustained)…. ‘it was thought at first that Captain Sharp would lose the sight of one eye, and James McIntosh the use of his hands.’

The bronze medal itself shows the Goddess Leucothea, a personification of the sea, offering the end of her veil to a drowning seaman clasping a floating mast, with “Leucothea rescues the shipwrecked” above in Latin. On the obverse are the words “Ob Cives Servator” which loosely translates as “For saving citizens” surrounded by a laurel wreath. The medal was designed by the famous engraver William Wyon (1795 – 1851), whose designs appeared on the first postage stamps and Victorian coins and medals. The beauty of the object and prestige of the design all emphasise the value placed on bravery and selflessness in the maritime world, a world where sailors had to look out for each other. 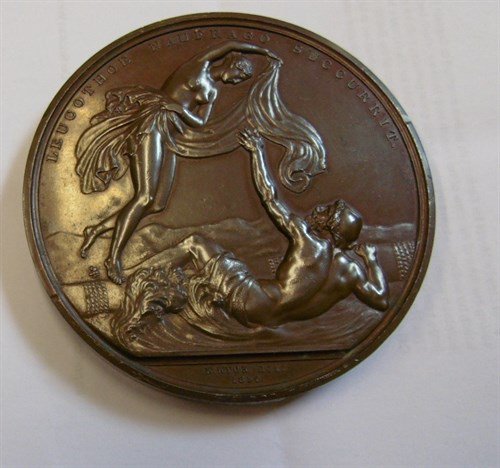