iversity of Glasgow student Carenza Murray was inspired by the Museum’s collection to research the role of women in maritime engineering.

Celebrating and engaging with women’s history is an essential part of all maritime sectors but particularly in maritime engineering and shipbuilding which continue to be profoundly male dominated. Despite the efforts taken towards changing the tide of gender representation within the sector, the representation of women workers in these industries and in the collections of Scottish maritime museum collections remain generally lacking overall.

So, in advance of World Maritime Day on the 24th September 2020 this week we take a look at the representation of women in maritime museums across Scotland.

The Turning Tide: A Brief History of Women in Maritime Engineering

Women have been making waves in the arenas of modern maritime engineering and shipbuilding for well over two centuries. The beginnings of the representation of women in these sectors are spearheaded by women from privileged backgrounds in the late 19th and early 20th centuries, namely Isabella Elder, Blanche Thornycroft, Katherine and Rachael Parsons and Eily and Elsie Keary (University of Glasgow 2015; Stanley 2016; Nautilus International 2020). Their roles in the industry were, however, on the outer fringes of marine engineering, mainly confined to land owing largely to deeply ingrained societal misogyny. Despite this, the pioneering work of these women started to pave the way for future generations of women in maritime engineering, particularly with the founding of the Women’s Engineering Society (WES) in June 1919 (WES 2020).

This slow building momentum was pushed further by inspiring women such as Dorothy Rowntree, the first woman to graduate from engineering from the University of Glasgow and, to boot, the first woman to graduate from a naval architecture degree in the UK (University of Glasgow 2016). Many of us will be familiar with the example of Victoria Drummond – the UK’s first fully qualified female marine engineer and first female member of the Institute of Marine Engineers (National Library of Scotland 2013; Saltire Scotland Society 2015).

A trailblazing pioneer and a frequent attendee and contributor to the annual meetings Institute of Marine Engineers, Drummond is remembered as a truly remarkable engineer. She endured the first-hand extreme discrimination and prejudice from some of her immediate supervisors and persevered, earning the support and respect of her peers. She was inducted into the Scottish Engineering Hall of Fame in 2018 (Scottish Engineering Hall of Fame 2018). This is just a small snippet of her life, which I admit I can’t do give it proper justice in this post. The remarkable life of Victoria Drummond is covered more extensively on this blog in post by Sophie Gartshore, which I highly recommend! 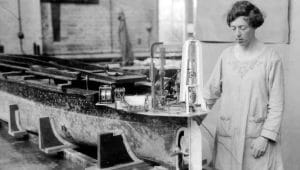 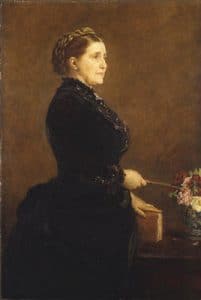 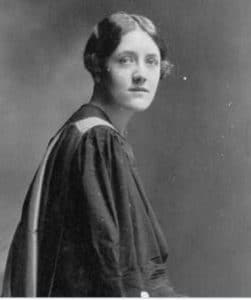 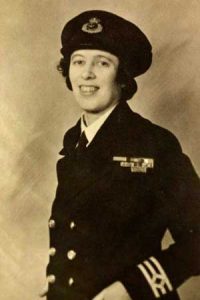 The Call to War

At the outbreak of the Second World War, women were required to work in a wide range of previously male dominated professions, and at the heart of the war effort, the marine engineering and shipbuilding sectors required an influx of new workers into areas such as Burntisland, Rosyth, and Clydebank as a high priority.

However, despite Drummond’s inspiring successes, women were not actively encouraged to join the maritime engineering sector. In fact, Drummond was, rather perplexingly, seen more as an abnormality in her profession and not a role model (Stanley 2016) at this time. Far from the ‘Rosie the Riveter’ archetype so commonly recognised from the era, women employed in shipyards during the war were more likely to be working as tracers and typists than at the heart of on-site action (Greiling 2020, personal communication, 7 July and MacLennan 2020, personal communication, 9 July). Female engineers, like Kathleen Chalmers, were truly few and far between (Imperial War Museum 2020). Yet as opposed to the First World War, women were employed in a greater range of skilled roles in general. Despite this, misogynistic attitudes still largely persisted in some while others often praised “their girls” as in the peers of Victoria Drummond (Stanley 2016).

Sure enough when the war ended, women were quickly ousted from their roles as shipyard workers and engineers on the return of male workers. These immediate redundancies were echoed across many sectors, but it nevertheless dealt a devastating blow to the wellbeing of women like Janet Harvey, who had worked tirelessly as an electrician in John Browns shipyard in Clydebank, who was ‘cast aside’ (BBC News 2018). It would take until 2018 that Harvey would receive any kind of recognition for her work, being awarded an honorary doctorate in engineering by Glasgow Caledonian University. The work of many other women shipyard workers and engineers in this period, however, still remains largely unacknowledged.

“…They’ll be making hammers from aluminium

So the weak sex may them swing

And convince themselves they’re the real thing

Oh woe to us when it comes to pass

That women do our jobs at last…

…But they have their uses, I must declare

– Poem from the Merchant Navy and Airline Officers’

Into this fray entered the late Dr Elizabeth Killick. Made redundant from her role as a radar mechanic in the Women’s Auxiliary Air Force in 1947, Dr Killick defied societal attitudes by reaching the rank of Senior Principal Scientific Officer at the Admiralty Signals and Radar Establishment in 1966. Dr Killick went onto develop pioneering defence and radar systems for Royal Navy ships, all while promoting gender equality in her workplace (Baker 2019).

It wasn’t until the 1970s and 80s that any real change would manifest in increasing diversity in maritime engineering. While conservative attitudes often lingered, the campaigning of the Women’s Engineering Society, the Women’s Liberation Movement and the passing of the Sex Discrimination Act (1975), and the 1984 WISE initiative just to name a few factors, meant that women were slowly becoming more visible in the sector (Stanley 2016).

During this period, in 1980, Dr Killick was elected as a Fellow of the Institution of Electrical Engineers and two years later into the Royal Academy of Engineers (Baker 2019). Anne Madsen, current lecturer at the University of Glasgow and designer of ship propulsion systems, began her training soon after in 1988, actively working in engine rooms to 2001. Madsen’s career from cadet to chief engineer is a true tale of inspiration, yet even in the late 80s to the early 2000s was still fraught with male hostility (Stanley 2016). Many of these outdated ideas are still inescapable today and still hold a key role in upholding the proverbial glass ceiling in the maritime industry as a whole– where women only make up 2% of the workforce (International Maritime Organisation 2019).

The Representation of Women Maritime Engineers in Scottish Museums

From the perspective of a Bronze Age burial archaeologist who admittedly doesn’t know much about the maritime history and then having read around the history and achievements of women in maritime engineering and shipbuilding I was very excited to dive into researching the material culture surrounding the inspiring and pioneering women I had read about.

However, as you may have guessed from earlier on in this post, the lack of material culture or artefacts in the Scottish museum collections was immediately obvious. As part of the research going into this post, I emailed several museum collections team my enquiries regarding the material in their collections representing women in the maritime engineering and shipbuilding industries. Before continuing it’s worth noting that researching this topic has been made significantly more challenging due to the lockdown imposed by COVID-19. It may be that material culture in this shape or form is out there in the great beyond but is not accessible or forgotten in amongst these extenuating circumstances we find ourselves in. Not being able to visit these museums in itself to see any relevant items on display to the public was a particular frustration.

That is not to say that there is a complete absence of material. On the contrary, the collections of the Aberdeen Maritime Museum in comparison to other museums were particularly good, mainly owing to the preservation and keeping of written and oral records pertaining to the workers of the now defunct Hall Russell Shipyards (MacLennan 2020, personal communication, 8 July). Amongst the collections of the Scottish Maritime Museum, the Denny Tank oral history recordings also provide a ready insight into the lives of some women maritime workers (Moran 2020, personal communication, 29 July).

The Imperial War Museum in London, houses quite a large deal of photographs from shipbuilding companies at Alloa, Clydebank and Burntisland and sketches by Stanley Spencer of Kathleen Chalmers at work at Kingston Yard, Port Glasgow. These photographs and sketches are largely accessible online (Imperial War Museum 2020a). Indeed, much of the responses I received back from collections teams were mainly concerned with photographs taken in shipyards where women were present, but it was not entirely clear what their role was. While these photographs are great objects to have and enlightening in their own way, it does beg the question why is there an absence of other objects  – equipment, uniforms, personal items etc, from any period but especially from the Second World War. This is especially in museums serving areas like Rosyth, where 60% of the workers at the shipyard were women (Imperial War Museum 2020b).

I suspect that this is largely due to the ever-persisting problem of societal attitudes towards women in the early-mid 20th century, particularly stemming from the dismissal of women wartime workers and sexism in the workplace in the decades that followed. This may have perhaps meant items were simply not actively collected or donated. Whatever the reason, the lack of material culture in this respect is truly a loss not just for maritime museums, but for Scottish social history as a whole.

It is clear that there needs to be a renewed modern call for and effort to collect objects, beyond, but including photographs, so the voices of women in this sector both past and present are not lost to the narrative of time.

Change on the Horizon: What Comes Next?

The position of museums on this subject has never been clearer. We need to address this gap in collections where we can from the 19th century to the present day, continuing the good work of oral history recordings with an emphasis on the recollections of roles and testimonies of women in maritime industry as well as collecting a wider range of material culture for curation. It would also be of great interest to expand the sphere of the collection of material culture and oral history testimonies to Scottish maritime engineers from a wider range of ethnic, national and regional identities and religious backgrounds, as well as the stories of LGBTQ+ maritime engineers.

Museums have always represented enormous potential as educative tools. In gathering more material culture and oral histories we can best represent the otherwise forgotten stories of women and make invaluable contributions to local, regional and national history. The greater representation of women in Scottish maritime museums will not only educate  the public of this often overlooked part of maritime history but may even be enough to inspire future generations to pursue a career in maritime engineering or even STEM in general.

So come on, what do we have to lose?

Do you or anyone you know have any stories of women in maritime engineering, past or present? Get in touch, we’d love to hear from you!

An invaluable resource in writing this post which discusses the roles, achievements, and struggles of women at sea in the last two and a half centuries.