We have been given a complete set of sailmaker’s tools in a canvas bag. We have the papers of the sailor these belonged to, and they show that he was a sailmaker during World War II.

Although still rare at the time, sailing vessels were still used in the first half of the 20th century, whereas now engined vessels are used in almost all commercial or defensive activities, and sailcraft is limited to recreational, historical or training vessels.

In the bag are all manner of tools for splicing rope and wire, folding and stitching sail cloth, and performing all manner of sail repairs. The needles used are much bigger and tougher than would be used in domestic sewing, and to protect his hands our sailmaker would have used the leather ‘palms’ to push the needles through the fabric without hurting himself.

Some of the tools have been made by the sailmaker himself, particularly the ‘serving boards’ – the wooden spatula-shaped items which were used to wrap wire or rope tightly around another length of line in order to strengthen them or perform a splice. 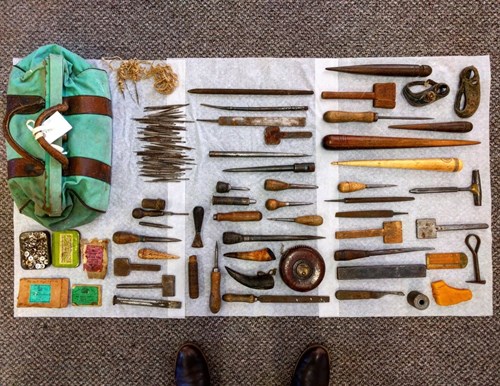