‘City of Adelaide’, a stunning glass ship in a bottle acquired by the Scottish Maritime Museum, has gone on display as part of a new exhibition exploring the huge rise in demand for these intricate objects in the 1990s.

The new Glass Ships in Bottles exhibition, which is now open at the Museum’s Denny Tank site on Castle Street, Dumbarton, has been curated by Dr Ayako Tani, a glass artist and researcher specialising in the industrial and cultural history of glassmaking at the National Glass Centre in Sunderland. 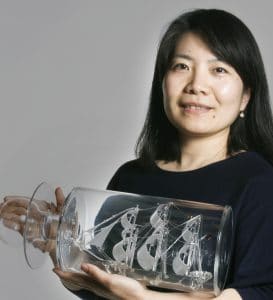 The exhibition features Dr Tani’s collection of vintage glass ships in bottles, her own glass artwork, including the ‘City of Adelaide’, and ‘Vessels in Memory’, an oral history and art project featuring filmed conversations with former scientific glassblowers.

Glass Ships in Bottles tells the remarkable story of highly skilled scientific glassblowers who were made redundant following the decline of heavy industry in the 1970s. Facing unemployment, they combined their experience making laboratory apparatus in an open flame with artistic flair to create and sell glass ships in bottles.

A boom in demand ensued and, by the 1990s, tens of thousands of these intricate glass ships were in production. Sadly, growing popularity led to mass-production which, although successful at first, brought about a drop in quality. The craft finally disappeared from the UK in 2005 when the last manufacturer outsourced work to China.

The profession, which is sometimes referred to as lampworking, began with the invention of robust Borosilicate glass in the 1880s but today, there are less than a hundred scientific glassblowers left in the UK and the skill is recognised as ‘Endangered’ by the Heritage Crafts Association.

Carving wooden ships for glass bottles can be traced back to the mid 19th century but the scientific glass blowers working at the end of the 20th century took it to a new level with these beautifully crafted glass vessels.

“Dr Tani’s passion for keeping this endangered craft alive shines through this wonderful collection of original glass ships in bottles, some donated and some rescued from car boot sales.

“Her artworks are created through the scientific skill of lampworking, which is used in making glass ships in bottles. She learned the skill to create her own artworks but also to pass the skill on to younger generations. We hope visitor leave Glass Ships in Bottles with new found appreciation of this stunning craft.

Working painstakingly on the detailed designs, the glassblowers blew each segment of the ship separately. Then, fusing the hull to a glass plinth they built the vessel up piece by piece before finally blowing the surrounding bottle.

Glass Ships in Bottles, which runs until 15 May, is included in Museum admission.

Up to three children go FREE with each Adult Admission.

For more information, or to book a visit: www.scottishmaritimemuseum.org

Issued on behalf of the Scottish Maritime Museum by